Thoughts on this year's Aussie Open 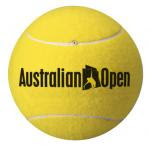 So, I checked out the Australian Open Tennis Championships even though I promised myself I wouldn't, since I knew it would only be a sad reminder of Martina Hingis's absence.

Especially with this being her most successful tournament and the start of her 2006 comeback no less.

I also couldn't stop thinking about how much the slower surface of the new courts would have benefited her game. Which made me more depressed.

I guess I like to torture myself lol. Actually I found the men's matches this year too good to resist. Particularly the 5 set 4 hour and 30 minute marathon with Roger Federer and Janko Tipserovic.

That whole thing was so intense I stayed up till 6 am to see the conclusion!. It was worth it though, tennis at it's best.

I also enjoyed a few of James Blake's matches (mostly because I didn't start watching the tournament until it's second week). I've become a fan of his over the last few years though.

And I stayed away from most of the women's matches due to the reasons mentioned above. I did get major satisfaction from Ivanovic's and Jankovic's defeat of the Williams sisters. That was a definite highlight for me (sorry but I cannot stand them).

With all that said this Aussie Open though filled with many surprises was quite disappointing as well. Roger Federer got knocked out by Serbian Novak Djokovic in the semi's for the first time in forever.

Djokovic is fun to watch and listen to actually and I do give the guy full credit it takes some doing to beat Federer even when he's not playing his best. He is definitely becoming Federer's greatest rival aside from Nadal.

Speaking of it will be interesting to see if Roger can take that elusive French Open trophy away from Nadal this year (I'm keeping my fingers crossed).

To make matters worse Sharapova knocked out #1 Justine Henin who to be fair also didn't seem at her best. Sharapova went on to win the title.

Personally I was surprised to hear that it was only the 3rd grand slam of her career, feels like she's been around longer lol. Or maybe I'm just confusing her with the accomplishments of Hingis again.

Despite not having my favourite player there, Aussie Open remains my favourite grand slam, the only downside is the 16 hour time difference.

It makes watching any of the matches live an impossibility. I hope that's something sports t.v. broadcasters work on in the future.
Posted by Lurker at 9:46 PM
Email ThisBlogThis!Share to TwitterShare to FacebookShare to Pinterest
Labels: Aussie Open, tennis