GQ The Life and Style of Roger Federer

Bernard Arnault calls him “a living god”, Bill Gates eulogises him in the latest Time 100 list and Anna Wintour is his biggest fan. Having LVMH’s CEO, the world’s second richest man and publishing’s most powerful woman on your cheer team doesn’t happen without reason. Of course there’s the on-court brilliance and the records he’s racked up (20 grand slam singles titles), but it takes meeting Roger Federer to truly understand how he’s charmed such a squad.

After a lifetime of intensive exercise, quality eating, globally accrued sunshine and limited late night partying (although as a Moët & Chandon ambassador, presumably the odd glass of champagne), the man positively glows. And as a result of all his success, there’s a smooth social confidence, a statesmanlike quality that the world’s most successful can’t resist.

After skipping his second clay court season - meaning he’ll miss out on the chance of another French Open title, but improve the likelihood of winning another Wimbledon - talk of Roger’s retirement has bubbled up again, but he insists that while he’ll miss “the goosebump feeling” when he does eventually quit the court, his ultimate dream is to be known more for his foundation than for his tennis. It’s the reason why the French elite gathered in Paris last week: for the launch of 20 limited edition bottles of Moët & Chandon Grand Vintage to celebrate his 20 years of tennis success, with the profits of the sale (each leather-wrapped magnum costs €19,998) going to the Roger Federer Foundation, which aims to improve the lives of underprivileged youth in Southern Africa and Switzerland.

With Federer dazzling in Dior Homme, we took some time to talk to him about his evolving sports silhouette, tennis’s perennial backwards cap, those Wimbers blazers and his very own wardrobe malfunction.

“I used to wear jogging shoes, jeans and a practice shirt, then when Mirka met me, she would look and go, ‘Errr, are you sure about this look?’ She was sophisticated early on. She would save her money and buy something proper, whereas I was happy without much. Over time, you realise you have red carpet appearances, you need a suit, you need a tie. And by the third time wearing the same tie on the red carpet, you’re like, ‘Maybe I should have different ties, different suits, different black shoes for a change.’ I started to enjoy making changes, trying out a few things, different combinations. You’re happy to get dressed up, especially in the big cities like Paris, London or New York and go out.”

“I don’t understand how I used to wear [size] extra large, but that’s how we used to dress. Sampras and Agassi used to wear this baggy stuff. It was just a trend, so in hindsight, I think, ‘Was I crazy to wear XL at 17?’ But you wanted to think you were big and buff, even when you weren’t yet. Now we look stronger and slimmer because of the way we wear it. That’s where the power of clothes is so important: it really can change your entire look. Look what Rafa did, when he went from the sleeveless tops and the Capri pants to the more sophisticated look and you’re like, ‘Oh my god, he looks much more muscular and like he lost weight’, but he didn’t do anything.”
SHUTTERSTOCK

“At Wimbledon, we tried to bring back the history of the game when they walked out in jackets or cardigans. We tried to push the envelope – sometimes a bit too much. But it was fine. These moments stay memorable, and I was willing to take chances. There was the all black at the US Open, which was a pretty big deal, because nobody really wore all black. When somebody wore black shoes, it was like, ‘Wow, black shoes!’ It was especially good at night. I think that tennis has always had a big opportunity to mix it up. We have 12 different outfits a year and tennis has a lot of history and street cred. We’ve kind of lost that because it’s got so aggressive and everything has to be breathable, durable, the shoes and everything. We’ve moved away from it, so I’ve tried to bring a little bit of style into tennis.”

“Honestly, I think it keeps me young because around them I try not to wear clothes that they can destroy or make super dirty when I’m picking them up, running round in the mud or going for a barbecue. I think they keep me young for the most part. With the girls, we’re starting to head in the direction where they start to like to be alone sometimes because Dad’s not cool anymore. They’re not there yet – they still like it when I’m around. I think we’re a few years away, but soon they’ll be like, ‘It’s OK, Dad. We’re OK alone.’ That will be the first time I’ll be really sad.”

“Everything was part of an evolutionary process, like the long hair. Do I regret having long hair? No, I’m happy I had it and I’m happy I got rid of it again! It was just a part of my life. We wore the cap backwards just to keep the hair out of our faces. Instead of having it in front where you toss the ball and it can sometimes get in the way, backwards just works. But now I think the headband is just easier overall.”

“Maybe putting my pants on backwards in the Wimbledon ceremony! Back in 2005 or 2006, I was so excited I won, I wanted to put on the whole outfit that we’d made together. I went to receive the trophy and as I walk down, I’m a bit nervous and as I put my hands in my pockets, I realise that the pockets are going backwards. I was like, ‘It’s too late! I can’t change them any more!’ I lifted the trophy and the pants were on backwards. You could hardly see it, but I think one British media picked it up and were like, ‘What’s going on? He’s got the zipper at the back.’ That was quite embarrassing!” 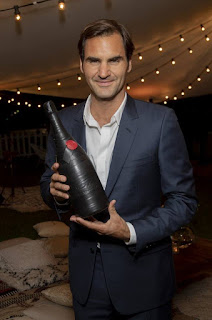 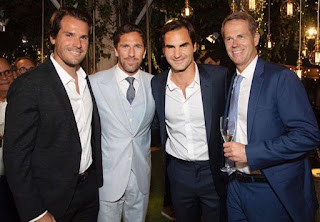 Roger Federer has been in several countries and places in the last week. Coming back to Europe from Dubai, he first stopped to Ibiza for a few days in order to enjoy the Mediterranean climate and sea, then went back to his home in Zurich, Switzerland, and on Thursday he spent some hours in Paris to promote a new Moet & Chandon champagne edition named after Greatness since 1998, in honor of his 20 years on the ATP Tour so far.

His wife Mirka, Federer's former coach Stefan Edberg and the former world No. 2 Tommy Haas were there. Federer is one of the main ambassadors of the French brand, but he is showing once again his charitable side. The limited collection, a maximum of 20 bottles (that have a leather grip at the end like a Federer's racket) will raise $400,000 as just one bottle will cost $20,000.


The money will benefit the Roger Federer Foundation, that will reach one million children through its programs at the end of this year.

tennisworldusa.org
Posted by Lurker at 12:15 AM No comments:
Email ThisBlogThis!Share to TwitterShare to FacebookShare to Pinterest
Labels: Roger Federer, tennis

Roger Federer has signed up to play the grass-court event at Stuttgart, along with previously scheduled appearances at Halle and Wimbledon.

"Excited to announce that I will be coming back to [Germany] for the Mercedes Cup," he said in an announcement on Facebook. "Looking forward to seeing you at the grass courts in Stuttgart."

It is the same schedule Federer followed in 2017, again not playing on clay and then competing at three grass-court events. But he got off to a shaky start, falling to Tommy Haas in his opening round at Stuttgart before rebounding to capture Halle and Wimbledon.

Federer is No. 2 in the rankings.