Roger Federer named one of Time's 100 most influential people 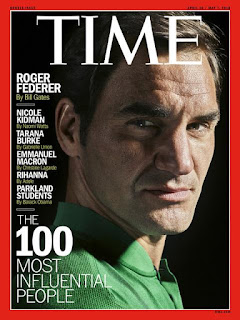 Roger Federer, the 97-time tour-level titlist who has spent a record 308 weeks atop the ATP Rankings during his illustrious career, was named one of TIME's 100 Most Influential People on Thursday. Out of the 100 selectees, just six people were chosen to be photographed for a TIME cover. The 36-year-old Swiss got the call along with activist Tarana Burke, comedian Tiffany Haddish, actress Nicole Kidman, singer Jennifer Lopez and Microsoft CEO Satya Nadella.

Bill Gates, the founder of Microsoft, wrote about Federer's success on and off the court for TIME:

It’s no secret that Roger Federer is the greatest tennis player ever. As David Foster Wallace wrote, he is “one of those rare, preternatural athletes who appear to be exempt, at least in part, from certain physical laws.” He also seems exempt from the laws of aging. At 36, he’s still winning Grand Slams with a combination of grace and grit.

But not as many fans know about what Roger is doing off the court. Twice I’ve had the thrill of being his doubles partner to help raise money for his foundation, and we’ve become friends in the process. I’ve learned how sincerely Roger and his team are working to improve the life prospects for poor children—a mission that stems from his childhood visits to his mother’s home country of South Africa and seeing extreme poverty firsthand.

Roger knows that effective philanthropy, like great tennis, requires discipline and time. It will be a sad day for all of us fans when he hangs up his racket—but we can take comfort in knowing that he’s committed to making the world a more equitable place.