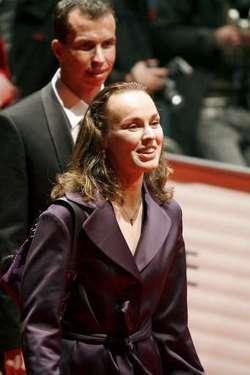 Well, it looks like Martina's professional life is a reflection of her personal one. It was recently announced she is splitting up with her fiancee Radek Stepanek. The two became engaged during Christmas of last year.

In a post from June of last year I mentioned the 2 of them, saying that I wondered how long it would last. Now I'm starting to wish I had made a bet lol.

But seriously, it's actually really sad that someone who has so much going for them just can't make it work in the love department. Unfortunately I think that's a curse shared by many professional athletes.

Perhaps this break-up is partly to blame for her less then stellar performances in the last few tournaments. It would certainly explain why she just checked out mentally in many of her recent matches.

Guess now we'll have to see whether this break-up will bother her during the U.S. Open or whether she'll be able to put it to the back of her mind and play her game.
Posted by Lurker at 4:58 PM
Email ThisBlogThis!Share to TwitterShare to FacebookShare to Pinterest
Labels: Martina Hingis, Radek Stepanek, relationships, tennis