Roger Federer into round of 16 'Manic Monday' at Wimbledon 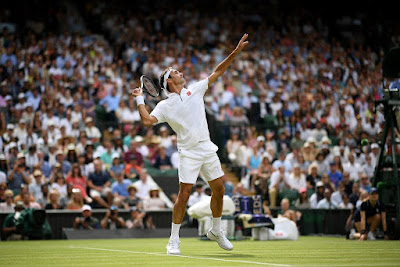 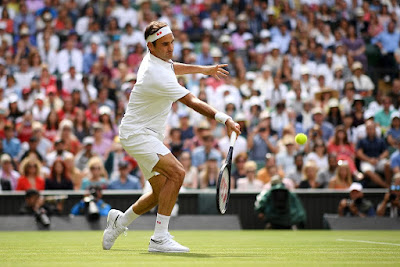 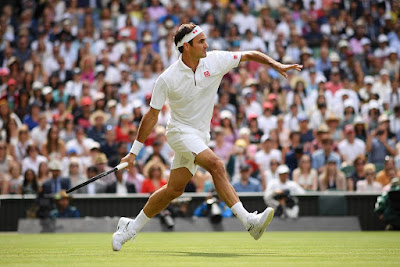 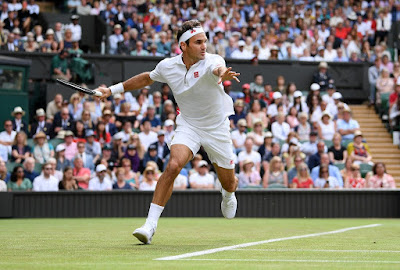 Eight-time champion Roger Federer was pushed early in his third-round Wimbledon clash against No. 27 seed Lucas Pouille, appearing in danger of dropping the first set for the second time this week. But one 10-minute surge was all the 37-year-old Swiss needed to grab the match with both hands and move into the second week at The Championships for the 17th time.

Federer defeated Australian Open semi-finalist Pouille 7-5, 6-2, 7-6(4) in two hours and minutes, becoming the first player in history to earn 350 Grand Slam singles wins. He is also the first man in the Open Era to reach the fourth round at Wimbledon 17 times, breaking a tie with Jimmy Connors.

"I'm very happy how it's going so far. I thought it was a good match with Lucas today," Federer said. "Of course, I hope it's going to take a special performance from somebody to stop me."

Pouille reached just one tour-level quarter-final since advancing to the last four in Melbourne this January. But the 25-year-old came out firing in his second appearance in the third round at SW19. The Frenchman went blow-for-blow with Federer in the early going, engaging in fast-paced rallied on the baseline with the 102-time tour-level titlist.

But Federer proved capable of maintaining his level in those types of exchanges, and that was key in determining the patterns of the match. The second seed hit 39 winners to just 14 unforced errors to advance to a battle against No. 17 seed and recent MercedesCup champion Matteo Berrettini, who defeated No. 24 seed Diego Schwartzman in a five-set thriller.

The biggest moment of the match arguably came at 5-5 in the first set, when Pouille earned a break point that, if converted, would have allowed him to serve for the opener. Federer used two overhead smashes to stave off that chance, and never looked back from there, winning the next six games to take a commanding lead.

"I'm happy that I'm able to raise my level of play," Federer said. "There was a great run of games midway through the second, also after winning the first. I like seeing moments like that in a match for me."

Pouille recovered well in the third set, using good depth to keep Federer from completely exerting his will on Centre Court. The Frenchman saved the first match point he faced while serving at 5-6, eventually forcing a tie-break. But Federer used a strong return to take control of a point on his first return point of the tie-break, and he stormed on from there. The 19-time tour-level grass-court titlist closed out his triumph when Pouille hit a backhand into the net.

Federer has never previously faced Berrettini, who has climbed from No. 81 to No. 20 in the ATP Rankings since the start of Wimbledon last year. The Italian saved three match points in the fourth set before outlasting Schwartzman 6-7(5), 7-6(2), 4-6, 7-6(5), 6-3 in four hours and 19 minutes, falling to the Court 18 grass after Schwartzman missed a backhand on his first match point. It was the longest match of the tournament thus far.

The 23-year-old has now won 12 of his 13 tour-level grass-court matches this year, despite having been 1-3 on the surface previously. Berrettini won two fewer points than Schwartzman overall, but he struck 22 aces and hit 75 winners in his victory.

"[It was] a really tough one. I wasn't feeling so good. I guess also because he was playing good, he was annoying me, the way he plays," Berrettini said. "I was a little bit nervous, too. But the good thing is the match was best of five, so I had time to figure it out and to improve my mind. It was a tough one, definitely."

Berrettini admitted he cheered for Federer when he was growing up, but stopped when he began to see Federer in the same tournaments draws as him. To the Italian, facing the Swiss is a dream come true. But for Federer, he expects a challenge.

"I don't know him very well on top of it. So that makes it a bit more tricky, as well. I saw him play a little bit in Halle. Saw his run, of course, in Stuttgart. Now he's backing it up here again. That's not easy to do, especially when you're sort of newer on the Tour," Federer said, before cracking a smile. "I'm expecting a tough one. I hope he has no energy left after today. I'm sure he'll recover. He's young. I'm sure we'll see a tough match on Monday."

Did You Know?
Federer is into the Round of 16 at a Grand Slam for the 65th time, extending his record for most trips to the fourth round of a major in the Open Era.