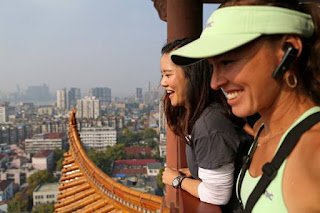 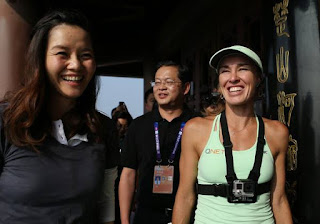 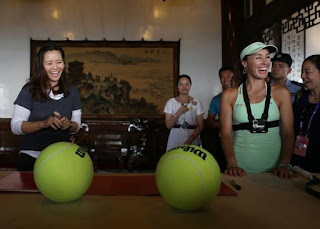 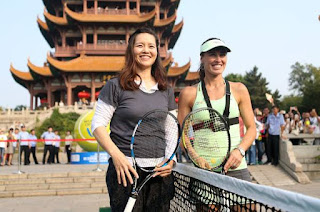 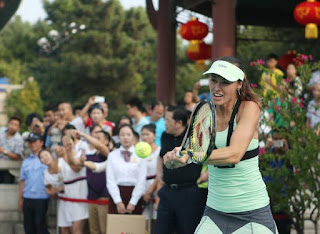 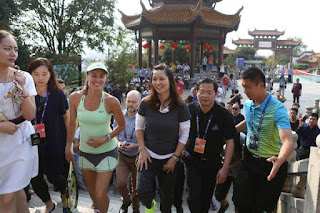 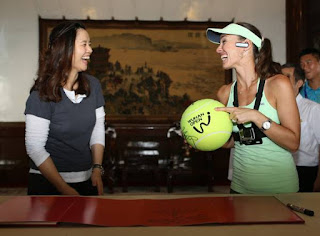 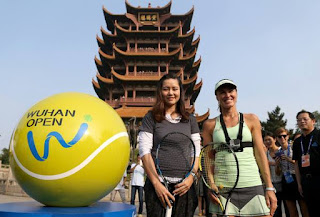 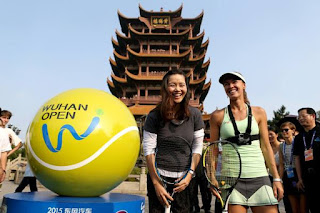 WUHAN China - Former World No.2 Li Na may have left the sport last year, but she has been more than happy to reunite with her tennis family when the WTA tour stops in her home town for the Dongfeng Motor Wuhan Open. Aside from the thrilling tennis, there is plenty to explore in the capital of the Hubei province, but few sights are more breathtaking than one of the Four Great Towers of China known as the Yellow Crane Tower.


Accompanied by former No.1 Martina Hingis - who is top seed in the doubles draw with co-Wimbledon and US Open champion Sania Mirza - Li took a tour of the landmark famous for its views of the Yangtze River with a history that mirrors the Swiss Miss herself.


The Yellow Crane Tower was first built around 223 AD, and despite disappearing multiple times from the Wuhan skyline, the tower has been rebuilt multiple times; the current incarnation was completed in 1985.


Hingis too has enjoyed the view from the top of women's tennis many times since arriving on tour in 1994; now in the midst of a third, doubles-only career, the 20-time Grand Slam champion won five major titles in 2015 alone, two in women's doubles, and three in mixed alongside Mylan World TeamTennis teammate, Leander Paes.

"I think she's amazing," Li said of her travel companion, who came armed with a GoPro camera to capture the experience, on Monday. "I don't know how many years she's already stayed on the tour but she still can win the tournaments."

The admiration was mutual, as Hingis expressed her awe of the impact Li Na has had on tennis in China.

"It's incredible. She is such a heroine for her hometown and giving hope to so many little girls from here."

Accompanied throughout by a large group of her fans, Hingis noted that Li's hometown reception was far greater than anything she experienced in Switzerland.

"I got a welcome at the airport but I think China has a bit of a bigger population. For Li Na to come from Wuhan and make it so big in a global sport has given hope for so many people here."

Following a tour of the Yellow Crane Tower, the two engaged in an exhibition on the nearby grounds; though the Chinese star has retained the clean precision on her groundstrokes, Li admitted that she wouldn't change how things unfolded for anything.

"It's totally different. When I was an athlete I always had practice, and then match. Now I just enjoy the family life.

"This is my dream life."

For her part, Hingis is still very excited to be competing for titles, and with the BNP Paribas WTA Finals Singapore presented by SC Global in her sights, the top seed enjoyed having some fun before the serious week in Wuhan began.

"It is nice winning in the US and then Guangzhou, then coming back here. I really feel good here. The courts are nice, beautiful new stadium so everything is perfect."

Hingis and Mirza open against Klaudia Jans-Ignacik and Anastasia Rodionova on Court 1 on Wednesday.

wtatennis.com
Posted by Lurker at 12:00 AM
Email ThisBlogThis!Share to TwitterShare to FacebookShare to Pinterest
Labels: Martina Hingis, tennis