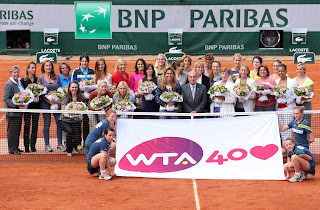 All the famous ladies past & present :)

PARIS — It was a good payday for Victoria Azarenka. She earned $496,725 (in Euros) as a losing semifinalist in the 2013 French Open women’s championships. Her paycheck symbolized the success of the women’s movement in tennis, an achievement that was celebrated immediately after her match on Thursday against Maria Sharapova.
More than a dozen women players from several decades walked onto Court Philippe Chatrier through a corridor of flowers held by ball boys and ball girls. As the crowd cheered and waved, they were handed thick bouquets of flowers and saluted by the French Tennis Federation. It was a celebration of 40 years of women’s independence in tennis.
Images flashed on two giant video screens of Billie Jean King and the dozen or more women, most of them Americans, who rebelled against tournament organizers in 1973 to form their own international tour, initially financed by a tobacco company. In that era, women still received much less prize money than men. Parity began to emerge only in recent years. Still, paychecks grew enormously for the top players.
In a broadcast booth above the stadium, Amelie Mauresmo of France smiled and waved back at the crowd as her image appeared on screen. Mauresmo won the Wimbledon and Australian Open titles and earned nearly $15 million in a 15-year playing career.
Downstairs, Azarenka said, “It’s an incredible thing, what happened 40 years ago to start something from scratch and look where we are here today, you know, with one of the biggest women’s sport in the world.”
Sharapova, who was guaranteed $993,450 for reaching the final, said, “I’m really proud to be part of it.”
Largely unrecognized by spectators, Selima Sfar, 36, a retired Tunisian player who lives in Paris, carried her bouquet off the court and told a reporter who apologized for asking her name, “No, you should not recognize me; I’m not that big.” Sfar earned more than $800,000 in prize money in 12 years, reaching 75th in the world in 2001, according to WTA records.
“In the other Arab countries, I hope this is going to be something new, something more for them to inspire them to play tennis and play at a good level,” she said.
As the second women’s semifinal got underway between Serena Williams and Sara Errani of Italy, Sfar was interviewed by French television. Afterward, she turned to a reporter and said: “I think it’s a huge thing what Billie Jean King has been doing for the women’s tennis, for WTA, equal prize money, Grand Slams, the big tournaments. It’s something nobody before thought was possible or feasible.”
Soon, after her semifinal victory, Williams praised the WTA and the sport. “I think tennis empowers women,” she said. “I think that’s the perfect way to say it. I think it’s a great sport. Honestly, it’s the best sport for a female to play and to be a part of.”
Boosted by increases adopted by the French Open organizers and the French Tennis Federation in recent months, the 64 first-round losers, men and women, earned $27,816 each. After Saturday’s women’s final and Sunday’s men’s final, the winners will receive $1,986,900 each and the losers $993,450 — big paydays for athletes of both genders.