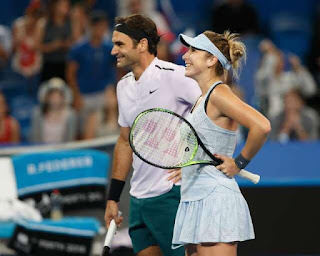 Federer set the Swiss on their way with an entertaining 7-6 7-5 victory over Jack Sock, before Belinda Bencic took out CoCo Vandeweghe in two hard -fought sets to give the Europeans an unassailable 2-0 lead.


Switzerland are looking to win the Hopman Cup for the second time, following their success back in 2001, when Martina Hingis partnered Federer, and 16 years later, the evergreen Swiss, alongside Belinda Bencic, is on the verge of giving the country her second title. The Federer-Bencic combination is featuring at the Hopman Cup for the second straight year- they finished second in the round-robin phase last season, narrowing losing out to eventual champions, France, but the likeable duo have been on a mission to make amends for their 2017 shortcomings, moving through to the final without losing any rubbers.


Opting to begin his season at the more relaxed atmosphere of the Hopman Cup, Federer will surely have appreciated the workout he has had so far. The opposition has got progressively more difficult, from a routine win over Yuichi Sugita in his opening match, to his hard-fought straight-sets conquest of the big-hitting Karen Khachanov, and then Thursday night’s gripping win over Sock.


Federer had all the early chances against Sock, failing to convert a 15-40 lead at 2-1 and a 0-40 lead at 3-2, with the resolute American opponent across the net coming up with some big forehands, and clever work at the net to stay with Federer. Sock tidied up his serve, and held more comfortably after that, carving out a break point in the ninth and eleventh games, but the set ultimately went into a tie break, with Federer taking early control with two mini-breaks for a 3-0 lead. Sock refused to go away, and evened the breaker at 4-4, but Federer won three of the next four points to take the opening set.


Federer’s break-point conversion woes continued at the start of the second set, with the Swiss missing out of another 15-40 opening at 1-1, but he eventually found his way late in the set in a moment of inspiration. With Sock crowding the net and volleying Federer from side to side, the great Swiss showed fantastic athleticism to cover the baseline before unfurling a magical forehand on the run that was too hot to handle for a bewildered Sock. It was so good that it drew a gasp, and then a giggle from Federer himself. That helped Federer to a 6-5 lead, and the Swiss went on to serve out a thrilling 7-6 7-5 victory after an hour and 35 minutes.


“I’ve maintained a high level in all three matches, which is a great thing. This was another step up in terms of ranking and I thought it was a very entertaining match for both of us and we got to interact with the crowd, which was great. I thought it was a good step forward”, Federer said.


“It was a lot of fun. We sort of get the opportunity to try out things in the right fashion, without the chase of so many ATP points”.


With Switzerland 1-0 up from the men’s singles, Belinda Bencic ensured that the Swiss will finish top of the group, and take their place in Saturday’s final with a very impressive 7-6 6-4 victory over world number 10, CoCo Vandeweghe. There wasn’t much to separate the pair, but it was Bencic who played the big points better, holding her nerve to close out the win.


Bencic may be ranked outside the top 70 at the moment, but it is surely just a matter of time before she attains a spot much closer to her career-high No. 7 spot. The 20-year-old has had a rough deal with injuries in recent years, dropping outside the top 300 in September, but a relentless run of form at the back end of last season yielding WTA 125K titles in Hua Hin and Taipei, and an ITF meet in Dubai propelled the Swiss to a year-end ranking of 74. She has carried on from where she left off in 2018, beating three quality opponents in the Hopman Cup. Bencic opened with a straight-sets victory over Naomi Osaka, before edging out world number 15, Anastasia Pavlyuchenkova in three sets. However, Thursday’s victory over Vandeweghe was arguably her most impressive effort this week.


Bencic came through a rollercoaster opening set on a tie break, before breaking early in the second set to take control of the match. Vandeweghe made one last push when Bencic served at 4-3, building up a 15-40 lead, but the Swiss kept her composure remarkably to emerge with four straight points. Two games later, she closed out a fine win, sealing the deal with a forehand drive volley.


Federer and Bencic then joined forces in the mixed doubles to defeat Sock and Vandeweghe, as Switzerland went 9-0 in their 2018 Hopman Cup rubbers.


Switzerland will know their next opponents when Group A is decided on Friday, with Germany, Belgium and hosts, Australia all in with a chance of winning the group.