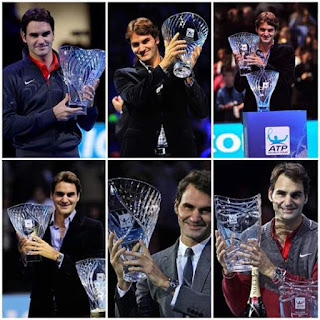 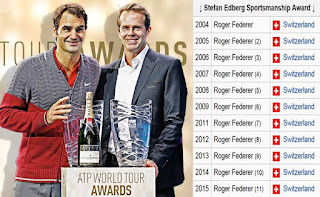 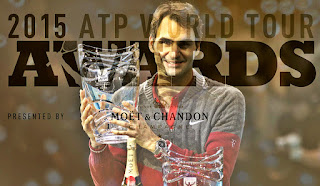 
Novak Djokovic, Roger Federer and Bob and Mike Bryan have been honoured in the 2015 ATP World Tour Awards presented by Moët & Chandon. While the ATP World Tour No. 1 Doubles Team presented by Emirates Award is still to be decided between four teams, all the other award winners have been announced today.


Djokovic receives the ATP World Tour No. 1 award presented by Emirates for a second straight year and fourth time overall, following an unbroken stint at No. 1 in the Emirates ATP Rankings since 7 July 2014.


Federer has been selected by his peers as winner of the Stefan Edberg Sportsmanship Award for an 11th time and by fans as the ATPWorldTour.com Fans’ Favourite presented by Moët & Chandon for a 13th straight year. Since 2003, Federer has won a record total of 31 ATP World Tour Awards.

The Bryan twins are the recipients of the Arthur Ashe Humanitarian Award for their off-court philanthropy with their charitable foundation, Bryan Bros, raising money for dozens of beneficiaries. They also take home the ATPWorldTour.com Fans’ Favourite presented by Moët & Chandon for a record 11th time and remain in contention for the ATP World Tour No. 1 Doubles Team presented by Emirates.


The 18-year-old Alexander Zverev wins the ATP Star of Tomorrow Award presented by Emirates for being the youngest player ranked in the Top 100, while players have voted Hyeon Chung as the Most Improved Player of the Year and recognised Benoit Paire as the Comeback Player of the Year.


Players will receive their awards in on-court ceremonies at The O2 throughout the tournament week.


Well-known writer Linda Pearce of The Age (Melbourne, Australia) is the recipient of the Ron Bookman Media Excellence Award while the ATP Tournament of the Year awards will be announced in 2016.


Alexander Zverev: This category in its third year, replacing the player-voted Newcomer of the Year, is awarded to the youngest player in the Top 100 of Emirates ATP Rankings as of 9 November. Zverev, who began the season ranked No. 136, broke into the Top 100 on 18 May and reached a career-high No. 74 on 29 June. The 18-year-old German reached the Bastad semi-finals and the Washington, D.C. quarter-finals. He also won one ATP Challenger Tour title at Heilbronn.


Most Improved Player of the Year


Hyeon Chung: The 19-year-old Korean climbed more than 120 places from No. 173 in the Emirates ATP Rankings at the start of the year, winning four titles on the ATP Challenger Tour in 2015. He also reached the Shenzhen quarter-finals and is currently at a career-high of No. 51.


Comeback Player of the Year


Benoit Paire: A knee injury and long months of inactivity in 2014, saw the Frenchman drop out of the Top 150 in the Emirates ATP Rankings but in 2015 he produced a dramatic resurgence. He captured his first ATP World Tour title at Bastad in July to become the first player since Steve Darcis in 2007 to win an ATP World Tour, ATP Challenger Tour and ITF Future title in the same season. He recorded his first Top 5 win over No. 4-ranked Kei Nishikori in the US Open first round and went on to finish runner-up at Tokyo where he beat Nishikori again in the semi-finals. He is currently at a career-high No. 20 in the Emirates ATP Rankings.


Roger Federer: Fellow players voted the Swiss as the winner of the Stefan Edberg Sportsmanship Award for the 11th time and fifth year in a row. He also won the award six straight years from 2004-09. Rafael Nadal, David Ferrer and Kevin Anderson were also nominated in this category.
Posted by Lurker at 12:00 AM
Email ThisBlogThis!Share to TwitterShare to FacebookShare to Pinterest
Labels: atp world tour finals, Novak Djokovic, Roger Federer, tennis