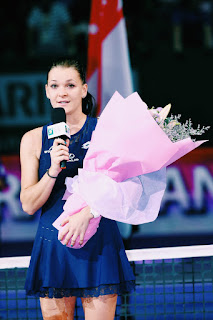 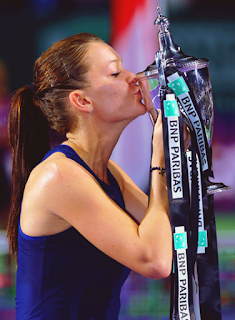 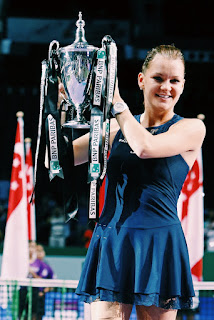 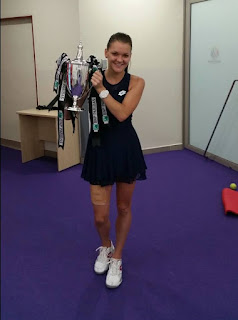 Watch highlights, interviews and much more video from Singapore right here on wtatennis.com!

It was a true underdog story - not only did she leave the US Open three spots out of even qualifying for the event, but after battling just to make it into the field, she was a longshot just to make the final four, having lost her first two round robin matches against Maria Sharapova and Flavia Pennetta.

But a win over Simona Halep in her third round robin match and a little help from Sharapova took her to the semifinals, and she pulled off another surprise there, grinding past Garbiñe Muguruza in three dramatic sets - her first victory over the Spanish WTA Rising Star in five attempts this year.

And then, longtime rival and fellow former No.2 Kvitova in the final - Kvitova was also playing on a new breath of life, going 1-2 in the round robin portion herself before reviving her game and battling her way into the final, pulling off a stunning upset over the red-hot Sharapova in Saturday's semifinals.

Radwanska came out on fire, capitalizing on a few untimely unforced errors from the Kvitova racquet to build an early 6-2, 2-0 lead. Kvitova started to find the range on her huge lefty game, winning eight of the next 10 games to sneak out the second set, 6-4, and build a 2-0 lead in the deciding set.

But the No.5-seeded Radwanska had one last fight left, breaking back to get to 3-all and then pulling away from there, winning three more games to finish off the No.4-seeded Kvitova, 6-2, 4-6, 6-3.

"A few weeks ago I didn't even know I'd have a chance to be here, and there you go. It's just an incredible day for me," an emotional Radwanska said during her on-court interview after the match.

"It means everything. It couldn't be any better. I think that was the biggest day in my life."

Just how well did Radwanska play in the final? Five - just five - unforced errors the entire match, with three times the winners (15). Kvitova, meanwhile, finished with 41 winners to 53 unforced errors.

"Well, the serve wasn't a huge weapon today, there were lots of ups and downs and lots of breaks!" Radwanska said. "But in the important moments I was really doing the right things, I think. Of course I had my chances in the second set, but it doesn't matter how I won. I'm extremely happy about this!"

Before this, Radwanska's biggest titles were Premier Mandatory-level titles at Beijing in 2011 and Miami in 2012. This was her first title at one of the five biggest events on the WTA calendar (the four Grand Slams and the WTA Finals). It's the 17th overall WTA title of her long, successful career.

wtatennis.com
Posted by Lurker at 12:00 AM
Email ThisBlogThis!Share to TwitterShare to FacebookShare to Pinterest
Labels: agnieszka radwanska, tennis