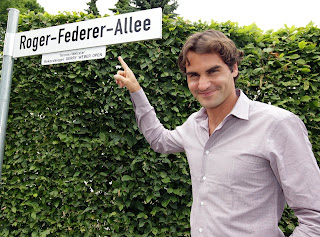 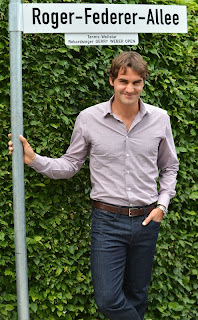 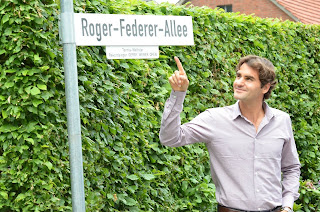 HALLE, Germany (AP) — Roger Federer has had his name on the trophy. Now he has it on the street sign as well.


The town of Halle in western Germany hosts the Gerry Weber Open, a grass court tournament that serves as a Wimbledon warmup.


Federer has won at Halle five times and has a "lifetime contract" with the tournament — if the Swiss great plays a pre-Wimbledon event, then it is the one in Halle.


Since the start of May, a street leading to the stadium, known as Weststrasse, is now called the Roger-Federer-Allee.


Tournament officials released a letter from Federer in which he said he is "extremely humbled" by the gesture, calling it an "amazing honor."

I think the question should be what doesn't the man have his name on?.

The list just keeps on growing.  That is pretty awesome though I must say.

Maybe some day there'll be a Roger Federer express way (sorry too easy couldn't resist had to go there).
Posted by Lurker at 12:56 AM
Email ThisBlogThis!Share to TwitterShare to FacebookShare to Pinterest
Labels: Roger Federer