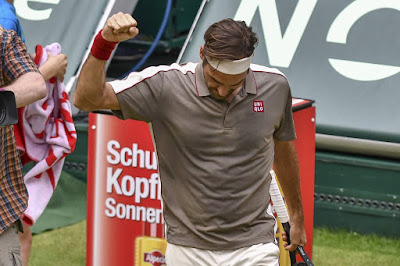 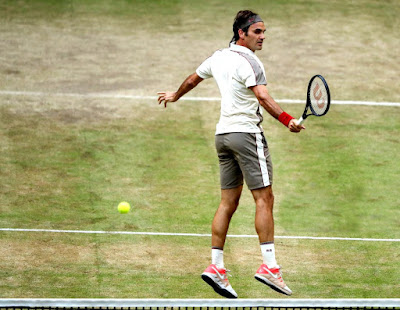 Five years ago, Roger Federer asked Pierre-Hugues Herbert to practise with him at the NOVENTI OPEN when the Frenchman was just starting out on the ATP Tour. On Saturday, the Swiss will see Herbert across the net as a semi-final opponent.

The top seed weathered an inspired effort from Spaniard Roberto Bautista Agut to prevail on Friday 6-3, 4-6, 6-4. The Swiss improves his FedEx ATP Head2Head against Bautista Agut to 9-0. Federer is through to his 15th Halle semi-final and is two matches away from his 10th title here, which would mark the first time he’s reached double digits in titles at an ATP Tour event.

”He’s a top player and he has beaten top guys before, played good at big events, gives the best players a hard time and beats them sometimes. You’ve got to expect him to come out there and play a tough match,” said Federer. “He’s able to stay in the rallies on the grass court and he has a very dangerous forehand. I’m not surprised about the tough match and enjoyed the battle.”

Saturday's semi-final will mark his first meeting against Herbert, who defeated defending champion and fourth seed Borna Coric after the Croatian retired due to injury. Coric conceded defeat after Herbert won the first set 7-5.

"It was a dream come true," said Herbert of his 2014 grass-court hitting session with Federer. "As a kid, I’d watch him and imitate his strokes. So practising with him, having fun and actually when you practise with him, he spoke and was interested in me. He asked a dozen questions about me."

Federer came out swinging in the early stages of the match, breaking Bautista Agut to love in the opening game with a forehand winner. Hitting his shots with pinpoint accuracy, Federer dropped just two points on serve and broke the Spaniard for a second time at 5-3 to grab the early advantage.

Bautista Agut refused to go away quietly. He increased his pace in the rallies and began to gamble successfully on passing shots and timely trips to the net. The strategy paid off and the extra pressure caused Federer to leak more unforced errors. Bautista Agut grabbed a break of serve to lead 2-1 in the second set and rode the slight advantage to force a decider.

A running forehand passing shot gave the Spaniard a break point in the opening game of the final set, but Federer saved it with a forehand winner of his own. Showing more emotion than is customary for the mild-mannered Swiss, he willed himself to a higher first-serve percentage and better form from the baseline in the closing stages.

But it was Bautista Agut who handed the match to Federer in the final minutes. Serving at 4-5, 15/0, the Spaniard hit four consecutive unforced errors to end play after one hour and 54 minutes.