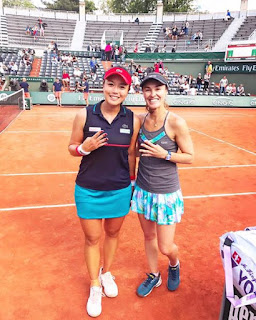 Taipei, June 8 (CNA) Taiwan's Chan Yung-jan (詹詠然) and Martina Hingis of Switzerland defeated their opponents with relative ease to reach the women's doubles semifinals at the French Open in Paris on Wednesday.

The third seeded Chan and Hingis beat Raluca Olaru of Romania and Olga Savchuk of Ukraine 6-2, 6-1 in the quarterfinals of the competition.

This is the first time Chan has reached the semifinals in women's doubles at the French Open.

Chan/Hingis will meet with the top-seeded Bethanie Mattek-Sands of the United States and Lucie Safarova from the Czech Republic in the semifinals on Friday. Mattek-Sands and Safarova won their fourth Grand Slam title at the 2017 Australian Open in January.

Good luck ladies, next one is gonna be tough.  Looking forward to watching it!.
Posted by Lurker at 2:30 PM
Email ThisBlogThis!Share to TwitterShare to FacebookShare to Pinterest
Labels: French Open 2017, Martina Hingis, tennis