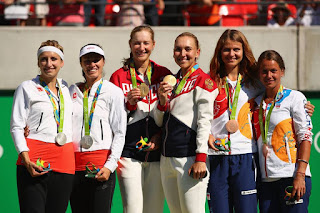 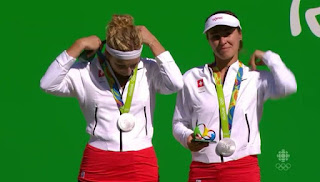 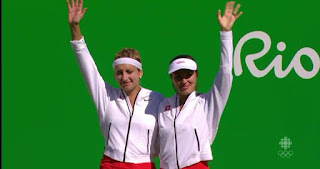 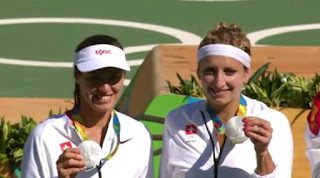 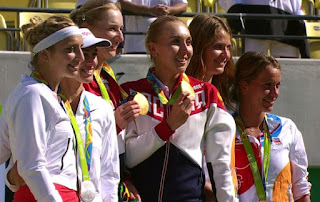 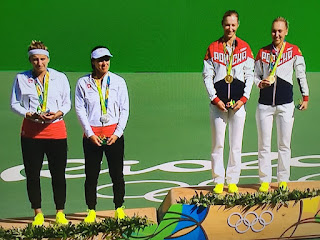 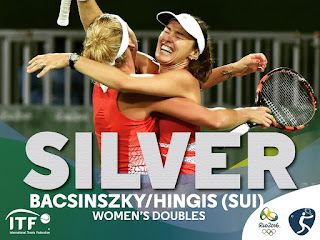 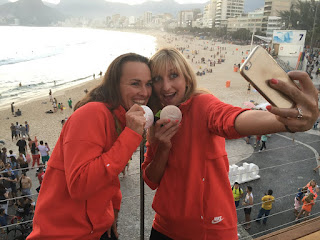 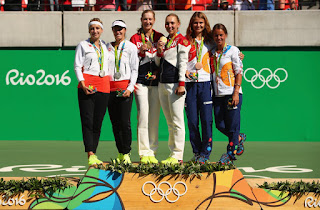 They should make a movie out of Martina Hingis's tennis career.

First the meteoric rise, five grand slam singles titles while still a teenager, the world number one ranking and her dazzling smile adorning magazine covers around the world.

Then there were the accidents, injuries, relationship bust-ups, retirements, two comebacks and a two-year suspension for testing positive for cocaine in 2007.

Older and wiser, the former Swiss Miss added another line to an already rich plot on Sunday when, 20 years after playing in her only previous Games in Atlanta, she added an Olympic medal to her collection in Rio.

It was not the color Hingis wanted as she and partner Timea Bacsinszky were beaten to gold in a 6-4 6-4 defeat by Russians Ekaterina Makarova and Elena Vesnina and there were plenty of tears shed at the end.

But a while later the 35-year-old, who came out of retirement for a second time in 2013 and has won three grand slam doubles titles to add to the nine she managed earlier in her career, reflected on her achievement.

"I think if you asked me 10 years ago if I would be here in Rio, I would say you're crazy because I didn't play for six years and being able to play for gold is unbelievable," she told reporters.

"Of course, you are a little disappointed (not to win gold), but looking back it's been an incredible journey," added Hingis, who had hoped to partner Roger Federer in a dream mixed doubles match-up until he was forced out by injury.

The Swiss, who recently announced that she had split with doubles partner Sania Mirza, said the tears were a mixture of joy and relief after a tension-packed week in which herself and Bacsinszky had saved two match points in the semi-final.

"We are there together to fight through thick and thin. We are one team, we made it on the court this far and I think we were very emotional in general," she said. "If it doesn't touch you at the Olympic Games, where does it touch you?"

Slightly disappointing, but the Russians were better and took their chances when it counted.

If Martina and Timea played together longer before the Olympics they would have gotten the gold.

They had their chances but lack of playing together regularly, and miscommunication on a lot of key moments proved to be their undoing.

Hingis also had a bit of bad luck given that she was suppose to play with Belinda Bencic originally (they might have had an even bigger shot together).

And of course the withdraw of Stan and Roger robbed her of a possible medal in mixed.

I'm sure Martina will continue to do well with her new doubles partner.  Already looking forward to watching her play again at the U.S. Open in a few weeks.

It may not have been the exact result they and the Swiss fans wanted, but silver is still fantastic.

Who would have thought that at 35, Martina would still be going strong and win a medal at the Olympics.

Another one for the record books, and another lovely memory to add to her continuously illustrious career.

Congrats ladies!.
Posted by Lurker at 12:00 AM
Email ThisBlogThis!Share to TwitterShare to FacebookShare to Pinterest
Labels: Martina Hingis, Olympics, tennis