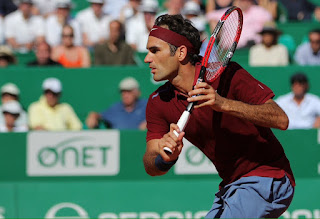 Roger Federer overcame a late wobble to beat Guillermo García-López on his return to action at the Monte-Carlo Masters.

The world No3 was playing his first match since the Australian Open and needed only an hour and a quarter to defeat his Spanish opponent 6-3, 6-4.

Federer sustained a knee injury running a bath for his young daughters and underwent surgery in February. He had planned to return in Miami three weeks ago but was forced to pull out through illness.

The Swiss looked sharp and would have won more handsomely had García-López not fought back from 5-1 down in the second set.

But it was nevertheless a highly satisfactory return for Federer at a tournament where he has reached the final four times but never lifted the trophy.